I watch a lot of Netflix. Like a lot, a lot. And so I was thinking about writing a post about the iconic TV characters that inspire me. Including Jessica Day, Olivia Pope, and Meredith Grey. I won’t spill the entire list, but here’s 9 female powerhouse TV characters that should be role models for every 20-something girl.

Let’s just get this one out of the way. Everyone is thinking about it. Everyone would destroy me in the comments below if I didn’t include her in the comments. Olivia Pope is a character that you don’t want to aspire to be but do. She’s fearless yet cautious. She knows what she wants and isn’t afraid to go after it — no matter how big the cost. She’s made some risky decisions in the show that have cost her friends, her job, and love. But she stood through every decision she made with her feet planted firmly in the ground. And that’s something I admire. Plus, she has a killer name. Olivia Pope? BADASS. 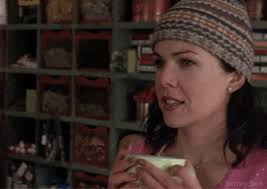 A completely different personality than Ms. Pope, but still a true girl boss. She raised a baby when she was 16 years old. She began a career as a maid in an inn and then eventually bought her own inn. She fell in and out of love. But most importantly, she created an unbreakable bond with her daughter. Lorelai Gilmore, with her witty and sarcastic humor, teaches young women everywhere not to get pregnant at sixteen, but teaches young women that no matter what obstacles stand in your way, you can accomplish anything. You can stand on your own two feet and see the world from your own point of view.

Samantha Jones, Sex and the City.

OK, before you get mad that I didn’t say Carrie Bradshaw first, let me tell you that Samantha Jones is the QUEEN of this show. Sure, Carrie offers advice on sex and dating in your twenties and thirties, but Samantha is one of those girl bosses that she knows what she wants. She’s had her ups and downs but she takes that stride of pride in anything that she does. She’s not afraid to be herself. Not only does that make her the queen of PR, but the queen of this show.

Carrie Bradshaw, Sex and the City.

If I included Samantha, I must include Carrie. I do consider myself a Carrie — not just because I’m a writer. Carrie offers advice and she gets to see the world from a different perspective. I think she’s a role model for women in their twenties everywhere because like Samantha, she’s not afraid to share her opinion with the world. However, Carrie prefers to share it via print magazine (hello, Cosmo). Plus, Carrie Bradshaw is literally #goals. What writer wouldn’t want to be Carrie Bradshaw?

Oh girl, you just know I had to include more than one Shonda Rhimes character! I wanted to include Shonda Rhimes but ya know, Shonda isn’t a TV character. She’s an icon. I’ll save her for a future #girlboss post. I debated between Cristina and Meredith. I chose Cristina as an iconic role model for women in their twenties because Cristina is that career-focused woman. Like Samantha Jones, she knows what she wants. But that also leads me to my next #girlboss…

AHHH my favorite show ever. OK, one of my favorite shows of all time. She’s quirky, she’s fun, and she’s certainly not afraid to be herself (like most of the women on this list). Why would I include her if she’s not heavily career-focused, determined, and ambitious? I mean, she is all of those things, let’s be honest. But she’s more than just that. She is weird — just plain weird. But that’s what makes her so unique. She teaches young women to be your weirdest self, to laugh at yourself, and to ignore the negativity. In my personal opinion, I think Jessica Day is the #1 TV female character that every young woman should look up to.

Robin Scherbatsky, How I Met Your Mother.

Have you noticed all of these female characters are ambitious and career-driven? Except Lorelai, but Robin Scherbatsky is no different. She chooses career over love, but she does so because she had an end goal in mind that very much didn’t involve kids. Ted Mosby knew that and he still pursued her. He pressured her into kids and marriage and almost talked Robin into it — until Robin came to her senses. She’s one of those women who stuck to her guns (literally, Robin is a gun enthusiast) and is original.

Last but CERTAINLY not least, Monica Geller is truly someone to look up to. Her and Jessica Day are the two TV characters that I truly look to in TV for advice. Monica grew from being fat, being constantly ridiculed for her weight and turned that into something positive. She is focused, determined, ambitious, and a little OCD. Honestly, Monica is a true #girlboss.

Hi y’all, I’m Liv! I’m a 22-year-old content creator who lives in D.C. and a proud Hokie alum. You can find me drinking either coffee or diet coke, reading the latest book, or quoting any line from Friends.

Hi y’all, I’m Liv! I’m a 22-year-old content creator who lives in D.C. and a proud Hokie alum. You can find me drinking either coffee or diet coke, reading the latest book, or quoting any line from Friends.